Home The Summit of Kings - Battle for the Supreme Jalen, A Swordsfall Adventure

The Summit of Kings - Battle for the Supreme Jalen, A Swordsfall Adventure

22 reviews
2 sold in last 8 hours
Swordsfall
SMT-PHYS
1 In stock
Tabletop RPG
$12.99 $4.99
NO COREBOOK NEEDED! THIS IS NOT A SUPPLEMENT. Softcover Available on Amazon! The Summit of Kings is a 2 - 4 player one-shot set in the Swordsfall universe. It can be played in several different ways. You can play it as a fun one-shot with your group, or an amusing...

NO COREBOOK NEEDED! THIS IS NOT A SUPPLEMENT.

The Summit of Kings is a 2 - 4 player one-shot set in the Swordsfall universe. It can be played in several different ways. You can play it as a fun one-shot with your group, or an amusing detour for the Jalen in your Swordsfall group. Or, with a bit of homebrewing, an adventure in your system of choice. Either way, the goal is to have a unique experience of a classic rap battle of your table. *rapping optional*

The Summit Of Kings

Once a year there is a special, one of a kind tournament held on the beautiful coast of The Isle. The Summit of Kings. A yearly battle where the top Jalens from around the world are invited to find out who is the best in straight oratorial combat. The only way to get into the Summit is through a special invite. Regardless of how well you place at The Summit, just the act of receiving an invite is considered a prestigious honor. The worldwide Jalen organization, The Sixteen, keep track of the millions of wordsages around Tikor. When the list goes out, the people listen. So, after spending months powering through the tales, speeches, and recordings of current Jalens, the Hot List is formed. The tournament set.

Who Will Be Crowned The Wordsmith?

The rules are simple. One on One, Jalen vs Jalen, Winner Takes All. Each Jalen takes there turn delivering the most crowd thrilling rap possible while the other patiently watches, careful to maintain a neutral face. They each vie for the roar of the crowd and the growing look of defeat on their foes face. Each summit battle lasts for three rounds with the winner being the best out of two.

Jalens, Voice of the People

Unlike most professions, Jalens don't have a single profound origin. Much debate still rages over where the first Jalen came from and who they were. All anyone seems to know for sure is that the profession came to rise out of necessity. Out of a need for the average person to have power and station over their life. Much like Griot are the voices of history, Jalens are the voices of the people. Where there are people, especially those in need, the Power of Word seems to come to life in someone. While it's possible to train and become a Jalen, most of them, especially the most powerful, seem to just be born for it.

Summit of Kings comes with it's own character sheets. And not just any, but the fancy kind. You can print them as normal or use your favorite PDF software to enter in the values on the sheet itself.

Written and Created by Brandon Dixon

Copyright © 2019 by Swordsfall Studios LLC.
All rights reserved. This book or any portion thereof may not be reproduced or used in any manner whatsoever without the express written permission of the publisher except for the use of brief quotations in a book review.

This is for the PDF... (but definitely going to try to get a hardcopy soon!)

Loved each page honestly! The content flows together whether its mechanics or 'lore'. Really can see the heart put into this! The visuals from the color choices to the character and setting designs appeal very much to me. It feels like a very solid work! Normally its hard for me to go through gaming material... like maybe I'll be focused on the mechanics... then have to stop... or maybe the lore .. .but then have to stop... kind of bring myself back whenever the mindset is looking for mechanics or story... but with Battle for the Supreme Jalen it flows together nicely and keeps me interested! I'm looking forward to investing more into more Swordsfall stuff!!

A great product and an excellent deal. Will be looking to get more products in future.

I bought this to checkout the setting, I follow the author on Twitter (@Swordsfall1, entertaining, informative, and thought provoking) .

-The style/aesthetics of the art is at one familiar and new and the art work is gorgeous. The rules are unfamiliar to me, coming from a D&D, Whitewolf, and Forged in the Dark background, but they are well described with poetic detail that does not ramble. Reading the book gets your riled up for a rap battle, and truthfully, I am excited to the upcoming rules for social interactions. (Brand Dixon released a teaser for divinations on Twitter and they are fascinating for both the mechanics and role-play.) The setting focuses on diversity, wonder, and badassness .

I like the idea of this module. I'm excited about where this is going and can't wait to run this with my group.

This is a great one shot or a side quest for an ongoing campaign. It's filled with enough content to make me happy and the art is incredible. It's great all around. 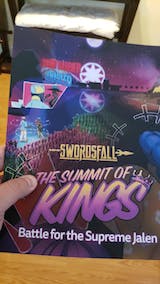